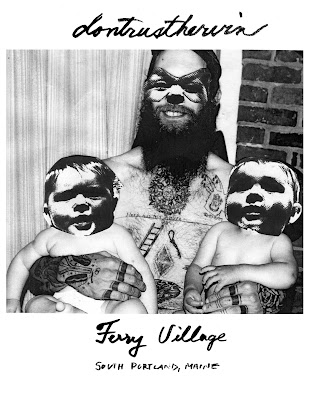 we've got some new releases on CD-r...


SunWalker - Yoncalla
(Eric of Tarpigh and Caleb of Big Blood)

Posted by dontrustheruin at 3:41 PM 2 comments:

Flyer by Sheela of Soft Touch
Posted by dontrustheruin at 7:41 PM No comments: 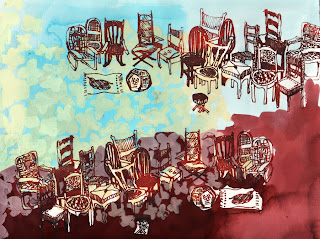 Latest epistle from the whole “Strange Maine” cultus comes from B.R. Garm, best known as a member of communal folk/drone project Visitations. This one is a whole other blat of boo, with a pained/fried atmosphere that sounds like Roky Erickson circa Bleib Alien power-crying through a set of songs that combine the dislocated/downer feel of Skip Spence and Bob Desper with War Sucks/Familiar Ugly style Krayola-isms in way that makes it feel like lysergic protest music made by backwoods Vietnam vets that have just emerged from the jungle and are convinced that the war is still on. There’s a kinda warped Higney/Vega sense of urgency to the vocal delivery while the settings of mile-high acoustic guitar, ginchy fuzz and howling choirs of cross-eyed backing singers come over like a wild Philspectrasound DIY hybrid. Throw in the kinda loose, celebratory style of the Rolling Thunder Revue and some of the most memorable songs ever written about blowing your own mind and you have one of the most beautiful – and beautifully confusing – backwoods psych releases of the year w/a nice cracked/personal edge. Locked grooves on both sides for maximal disruption. Highly recommended.****

***from http://honestbag.blogspot.com
First, the artwork alone on the 78th Morning Tide makes it worthy of your expenditure.  Prior to discovering any pertinent information, or even sampling the goods, I knew that the grooves would bear fruit.  This one has been spinning constantly for the past week.  The 78th Morning Tide, by B.R. Garm of Time-Lag favorite, Visitations, is released on Dontrustheruin, a label run by Big Blood.  If you enjoy any of the aforementioned, then it's likely you will dig this record.
The smoked out grooves on offer consist of lo-fi psych nugs of various tempo, utilizing acoustic and electric guitar.  I really dig B.R.'s style - when he sings, you can feel it.  Despite only using guitar, nothing sounds alike and the vibe is strong throughout.  The record glows warmly into the night, as B.R. does it his way:  telling stories about the apocalypse, getting stoned; of coming together in time of need; watching a girl smoking on rainbows and losing her mind; leaving the devil alone in the rafters; and the pretty red pony turning the frown upside down.
Tomentosa sold their stock quickly.  The record is still available throughDontrustheruin.